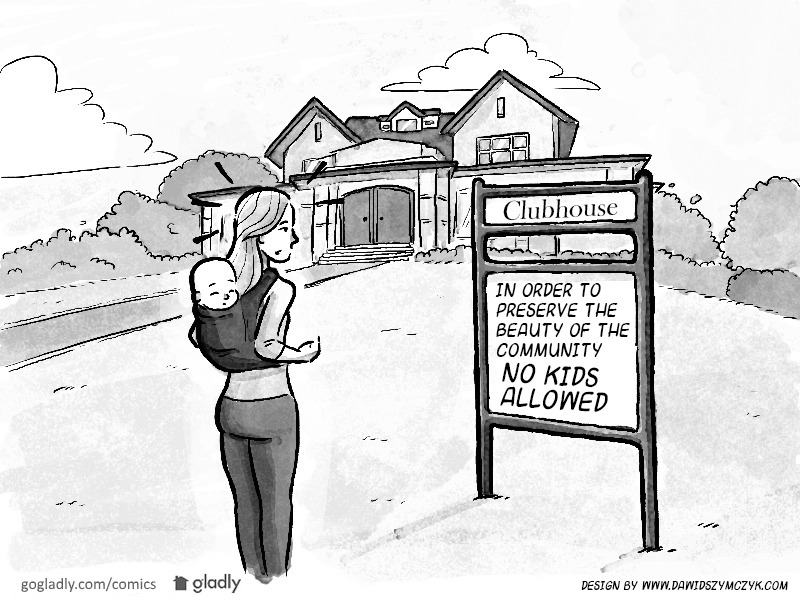 It’s not uncommon for homeowner associations to adopt rules that violate federal and state fair housing laws, or the Fair Housing Act (the “FHA”). Violations of the FHA can bring severe penalties, as demonstrated in a recent case where an individual was awarded damages in excess of a hundred of thousand dollars against an HOA.

The FHA protects people from discrimination based on race, religion, color, sex, national origin, familial status, disability, or source of income. Probably the most common FHA violations found in HOA rules concern discrimination based on familial status. Classic examples include: adult swim time hours for the pool, not allowing minor age children in the clubhouse or exercise room without adult supervision, and banning bikes, skateboards, and scooters from sidewalks within the HOA community. Even though many governing boards adopt such rules with good intentions, these rules are primarily directed towards families with children and will likely be found as discriminatory.

When governing boards adopt rules, the language of the rules should be facially neutral (meaning that they apply to individuals regardless of ages and membership in other protected classes) and not have a disparate impact (meaning that even a facially neutral rule applies at a much higher rate to members of protected classes). However, there are instances where rules may include language that applies to a certain age or class of individuals without giving rise to discrimination. These instances generally apply when an HOA relies on standards and guidelines of third parties when drafting and adopting rules.

This same logic may apply when analyzing rules concerning exercise rooms, clubhouses, or other areas of the community. If an HOA looks to an independent third party’s standards and guidelines (i.e. manufacturer’s suggested height, weight, or age for use of equipment, letter from insurance company addressing safety and insurability issues, etc.), then the HOA may be justified in adopting rules to protect against harm without rising to the level of discrimination.

A valuable strategy for board members is to carefully review their HOA’s governing documents with legal counsel and other industry professionals on a regular basis to ensure that the HOA’s rules and other governing provisions comply with the fair housing laws while balancing safety issues that your HOA must address. Keep in mind that the best rule of thumb is to adopt rules that are facially neutral and do not have a disparate impact on a protected class; however, as noted above, instances may apply where non-neutral rules may be found to be non-discriminatory when based on other safety factors.

Attorney at Morris Sperry Law Firm
Quinn is founding member of Morris Sperry law firm and an experienced litigator whose efforts are dedicated to matters involving community association law.Quinn acts as general counsel in advising the association's governing board on how to comply with and enforce their governing provisions in compliance with applicable federal and state statutes, the association's own governing documents, and in the best interests of the community. As a member of his local city council and other community boards, Quinn understands what it is like for members of associations' governing boards to make decisions that affect their neighbors, and he is cognizant of such issues when advising Morris Sperry's clients on governance issues.

Quinn currently serves on the Board of Directors for the Utah Chapter of Community Associations Institute, an organization dedicated to improving community associations through educational and leadership efforts. As a member of this organization, he frequently offers instruction at community events and writes educational articles on issues affecting homeowners associations.