Heating Up and Cooling Down 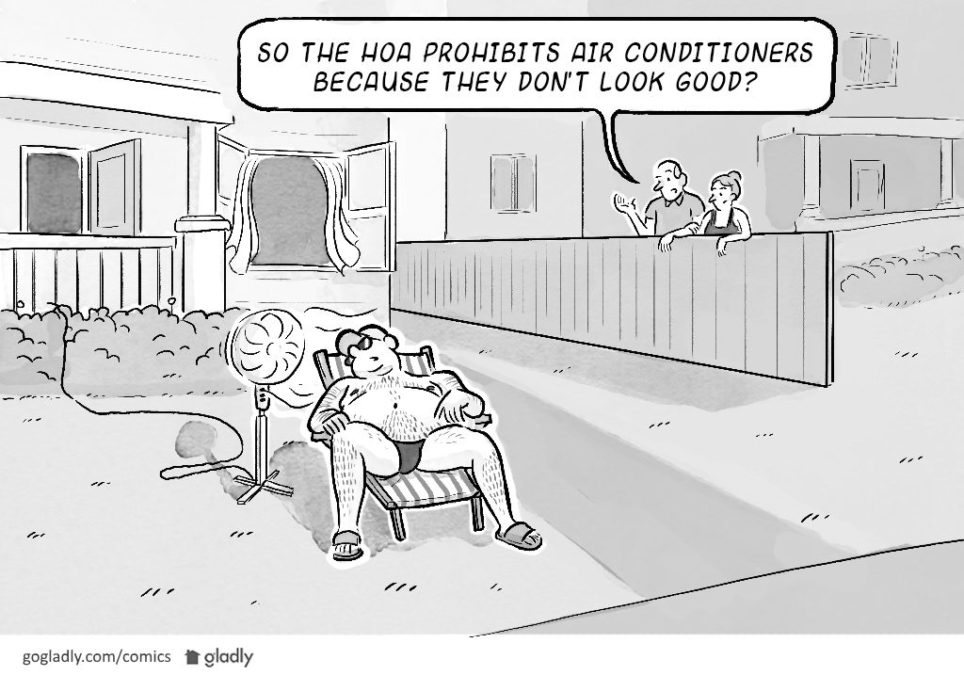 I think we can all agree that life can get hot and we like our air conditioned environment. And as a result, more people want to install air conditioners where there previously were none.

Homeowners living in Common Interest Development (CID) deed restricted communities, also known as homeowner associations (HOAs), must submit architectural applications to the Architectural Review Committee, or the Board of Directors to obtain permission to install air conditioners, in many cases. As you can imagine, this will add some heat to the already warm weather. So how do you prepare for this?

The CC&R will contain a section for Architectural Control. This section will indicate what types of modifications require an architectural application and approval by the Board of Directors.

In addition, there may be Architectural Rules or Policies that are an enhancement to the governing documents. Email the community manager and request an architectural application and the architectural guidelines you need.

Don’t be surprise to find out…

If you sit on an association Board of Directors, you need to ask the association’s legal counsel to provide guidance. All communities have similar, but distinctly different governing documents.

Legal counsel will review the governing documents and tell the Board if they can allow use of the common area roof, or other common area. Legal will probably advise the Board concerning certain types of papers the homeowner will need to sign, and possibly attach to the property title (recorded deed). A good HOA lawyer knows what to do, so seek their advice.

Write a letter to the membership letting them know that you are investigating the possibility of permitting air conditioners within the community, based on homeowner requests.

Indicate that legal counsel is reviewing the governing documents to determine what the Board may, or may not do.

You may need an engineering assessment of the electrical system.

The engineer will look at the electrical system to evaluate the condition of the system and its ability to withstand the additional load of air conditioners. You may be informed that upgrades are recommended or necessary.

After the Board has reviewed legal counsels written opinion, and understands what the Boards legal obligations are, this information needs to be communicated to the homeowners.

Explain the options, pros and cons, and costs associated.

IMPORTANT: The Board many want to have legal counsel review the letter prior to sending to the homeowners. You need to get the communication right, the first time.

If legal counsel gives the Board a thumbs up to move forward with rooftop air conditioners, you may want to hold a town hall to let the homeowners express their concerns.

Boards cannot always give homeowners what they want, but if the Board can explain why the decision was made, the homeowner is more likely to accept the decision, even if they disagree.

Victoria Cohen
Victoria Cohen is an active member of Community Association Institute (CAI) at the local, state and national level. She served on CAI's Community Association Volunteer Committee (CAVC) for 5 years, serving as chair in 2012. Victoria served two years on the CAI Board of Trustees, 4 years on CAI's nominating committee, and two years on CAI's Government and Public Affairs Committee. Back home in California, Victoria has served as secretary for the San Diego Legislative Action Committee and currently sits on the CAI San Diego Chapter Board of Directors.To learn more about Victoria, visit www.linkedin.com/in/victoriacohen2020