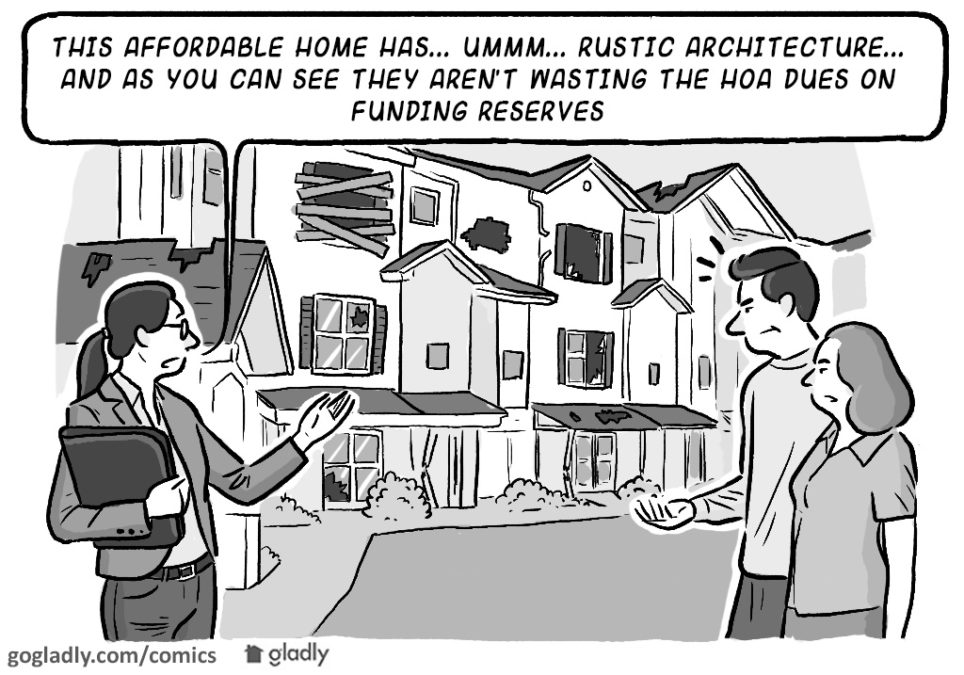 Reserve contributions are often relegated to “what’s left” status in the budget process, regularly characterized by Board members and homeowners, as a problem for future owners. We’ve been challenging this way of thinking for over 30 years, and finally, there’s proof that we hope will change the way HOA Reserve Funds are perceived – redefining them from a resented expense to a wise investment.

orrelate the sale price of a unit in an Association-governed community (measured in $/Square foot) to the Reserve Fund Strength (measured in % Funded) of the Association. My intuition suggested that there had to be a direct relationship, so we set out to find and analyze the data. The first step was to identify a very small geographical area in a very large city where we had performed a high density of Reserve Studies… almost 100 comparable associations within the last year. We then researched the home sales in those associations in the last year, finding sales in a statistically significant data set of 72 of those associations. We then cross-referenced sales price ($/sq ft) to the Association’s Reserve Fund strength (% funded). The results were remarkable. 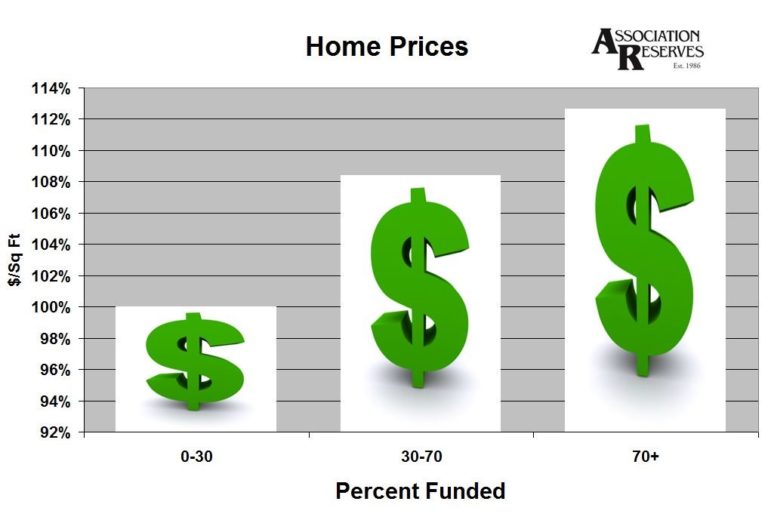 When the HOA reserve Fund is strong, projects get done, and they get done on time. An Association with no roof leaks, fresh paint, smooth & inviting asphalt and sidewalks, and regularly renovated lobbies and elevators will maximise curb appeal and that translates to units that command a higher price.

A strong HOA Reserve Fund is also an indicator of fiscal responsibility — a Board of Directors that is running the association in a responsible, businesslike manner. This typically means financial statements available for review, open and honest board meetings, and effective & transparent communication with homeowners. In other words, a peaceful and productive community, a nice place to call “home”!

For a long time, you’ve heard that adequate Reserve contributions are “the right thing to do”. Now you know they are also a smart investment!

Robert, you only mentioned the word “condominium” once in passing, midway through the article. Were these ALL condos? It seemed to me that the premise of the article referred to all types of HOAs, based on the first couple of paragraphs. Clarification, please?
-Ray

Yes, the test/data-gathering was on similar condo associations. I believe the same effect extends to HOAs, yet I believe the behavior or measured condition of the HOA likely has less impact on the sales price on those types of homes.

My latest favorite phrase is “ongoing contribution to offset the ongoing deterioration of the common elements” And we have our annual meeting in two weeks, oh joy of joys.

The classic study was in the early 1960s comparing subdivisions with HOAs formed in the 1940s and 50s. The covenanted communities held or increased value better than subdivisions.Comparing subdivisions with voluntary assns and HOAs with mandatory assns, the study showed greater community participation and social capital in the HOAs. Study done by Byron Hankie and published by the Urban Land Institute as Technical Bulletin #50 Homes Association Handbook. Funded by FHA.

Great article, Robert, but you know that there are other ways to know if a reserve fund is adequate besides looking at the “percent funded” number. Having more money in reserves than you need may look good to buyers, but is not truly the best use of the owners’ money. A good reserve fund has a rock solid study with it so the RIGHT amount of money is there when it is needed. Great website, btw.

Bettsi – Percent Funded is the best way we have to consistently measure Reserve Fund strength across the country, across all types of associations, as it is a defined parameter in National Reserve Study Standards.

Note that I believe in almost all cases the buyer was unaware of the actual Percent Funded figure, due to local Real Estate disclosure practices. I believe buyers chose their purchase price based on what they saw with respect to the condominium association (its common areas), and the Real Estate agent’s stated comments with respect to the association’s position and reputation in the community. In other words, “curb appeal” is real, and is facilitated with a strong Reserve fund.

So for me, seeing your complete article was extremely helpful because, like most HOAs, mine is in the middle group of 30 to 70% funded. It was comforting to see (from eyeballing your graph) that there is only about a 4% difference in selling prices from “middle” group and the 70+ Percent Funded group.

But may I ask one question?

Would you share what the sales price differences were for the 50 and 59 as well as the 60 to 69 Percent Funded compared to the 70+ Percent Funded?

The very selfish reason for asking for data for these sub segments is that my HOA is currently at 57 Percent Funded according to the last three year revision reserve study provided by our outside reserve consultant. As we complete the last phase of roof replacements next year the percentage will fall a few points, but will climb to well above 65 Percent Funded within five years before climbing well above over 80 Percent Funded ten years out.

Mr. Howell – good question. Since we only had about 100 data points, I believe that if we break it down into smaller increments, we begin to lose the clarity of the larger trend.

When would an HOA reserve fund be considered “over funded”? And how might that affect the resident home values?