Does Your Association Have Adequate Replacement Reserves? 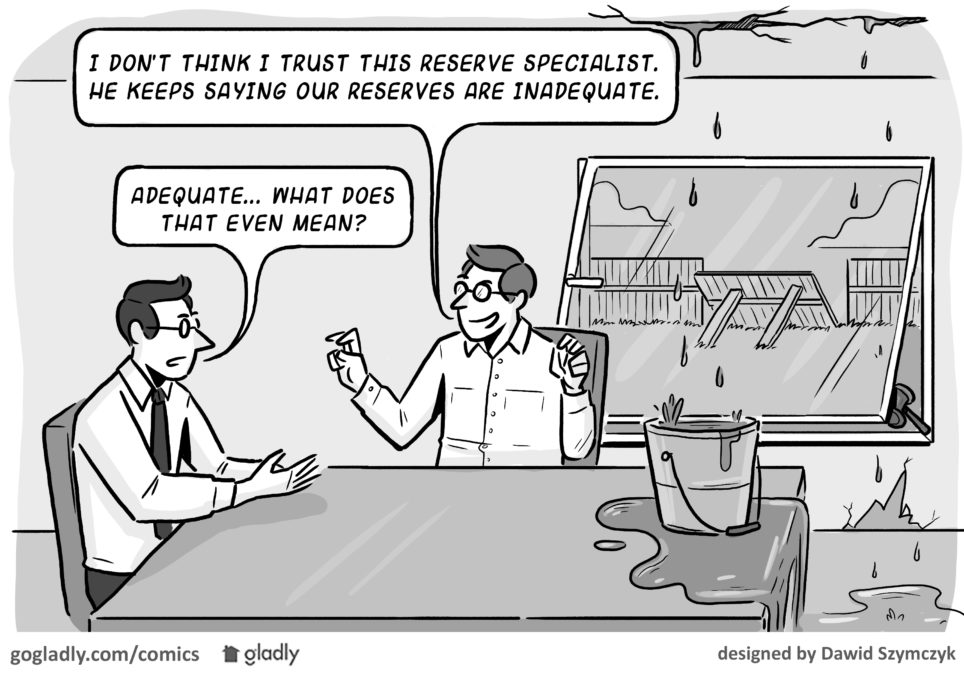 Physical deterioration occurs at every community association with the same certainty that the sun rises every day! This inevitable phenomenon begs the one important question for boards and managers:

Is Our Association Prepared?

Because deterioration — and any corresponding repairs and replacements — must take place on an ongoing basis, “adequate” replacement reserves is, by definition, a moving target! Just because you have adequate reserves today doesn’t mean the Reserve Fund will be adequate three months, three years, or three decades from now.

“Adequate Replacement Reserves” is defined as a Replacement Reserve Fund and stable and equitable multi-year Funding Plan that together provide for the timely execution of the association’s major repair and replacement expenses as defined by National Reserve Study Standards, without reliance on additional supplemental funding.”

In other words, “adequate replacement reserves” means that, through reserve funding and long-term planning combined, you have enough money for repair and replacement without resorting to special assessments.

Defining “adequate reserves” was a major milestone and accomplishment among reserve specialists. However, definitions can only go so far. The second question boards and managers should ask about adequate reserves is a little more specific: How do we know if we’re able to provide for the “timely execution” of repairs “without reliance on additional supplemental funding”?

But It’s Still a Moving Target

Claiming a strong Reserve Fund now doesn’t guarantee the association will have sufficient Reserves in the future to “provide for the timely execution” of a necessary repair project. Remember, the definition of adequate hinges on a combination of your starting point (i.e., Reserve Fund strength) and how well the association continues to prepare financially (i.e., Funding Plan) for the physical deterioration that occurs every day.

An association with a strong Reserve Fund (87% funded, for instance) may seem financially solid. But if Reserve contributions are significantly less than the rate at which the property is deteriorating, the Reserve fund will quickly drop in strength and the association won’t have the money it needs in six years to replace the roof. By the adequacy definition, that’s inadequate!

On the other hand, an association with a weak Reserve Fund (17% funded, let’s say) that is making significant Reserve contributions can build the strength of their Reserve Fund in time, to responsibly provide for anticipated upcoming expenses. Now that’s adequate!

You Need Reserve Fund Strength and a Current Reserve Study

The key to understanding how well prepared you are is to know your current Reserve Fund strength, and then compare actual Reserve contributions to the size of contributions recommended in your most recent Reserve Study. If the actual Reserve contributions are more than 20% less than the recommended contributions, the association is likely headed towards having insufficient funds to perform their Reserve projects on time without special assessments. But keep in mind that guidance from a Reserve Study more than three years old is of little value. If yours is that old, it’s probably time to get it updated.

The bottom line? Physical deterioration is inevitable, but also predictable. The board is responsible for protecting the investment of all owners by having “adequate” Reserves. Providing for the “timely execution” of Reserve projects “without reliance on additional supplemental funding” requires a Reserve Fund and a Funding Plan that work together to set the association up for success!

I often feel sorry for the reserve specialists because they’re looking at things as they actually are while their clients are looking at things as they imagine them to be. It’s difficult to get some organizations to see the reality of the community and face the long term requirements to keep it stable. Let alone continue to meet the requirements listed in the governing documents.

I am VP on our HOA Board. I have a hard time explaining to the Board how we need to increase the Reserves by at least 10% to count for the increase of cost when it is time to replace roofs for example. Our Management Company basically throws money into a fund called roofs. I am trying to get the Board to set up accounts that will make sure the roof money is there per building. My plan is to find out when building A’s roof was put on then the warranty on those shingles. Then in Building A’s account it would be the cost of the roof at the time divided by the warranty on the shingles and that is how much we need to put in Building A’s account every year so when the time comes for a new roof for Building A it is there. But I would like to pad it with at least by 10% because cost always go up. Am I nuts to have the major repairs that have warranties set up this way? We know the decks will have to be replaced they have a certain life span. In the deck account the money should be there for when decks built in 1999 have reached their life span of 15 to 20 yrs. can be replaced if needed. Decks built is 2000 etc. When all the buildings needed new doors, the money was not there. The Management Company took some money from another account to pay for the doors plus had a special assessment to get all the doors done. Why wasn’t the door money there? The Management Company is not managing the money properly. They are not thinking in the future. Now if the homeowners are happy paying special assessments for everything that needs to be replaced then okay. We can leave it like it is. But I know they are not happy. They are asking where the money is. I was forbidden to tell the homeowners what our monthly reserves are because then they will think the money is there to fix things. Don’t they have the right to know how much money is in the reserves? They are always complaining that they do not understand the annual report. Can’t the board explain why there is so much money in the reserves? That it is there for future projects. Maybe I am thinking this all wrong. Thank you for reading this.

Good practice is to have the components in the Reserve Study reflect the ages of various phases of the assets at the association, and their expected replacement costs. It is common to see multiple components for roofing, decking, etc. if there are multiple install dates. National Reserve Study Standards provide a four-part test that help identify all appropriate components, minimizing the chance significant components are “missed”. And finally, Reserve Studies are not only a budget report, they are an important disclosure document so owners can see how funds are being used and see the plan for maintaining their common area assets.

Thank you. I have asked the Management Co. for what was done when and the warranties. Seems they do not keep records that way. So, they must go through every receipt to find out, as they put it to me. I would think what you are recommending might be something I am interested in, but I have a board to explain it too. They are not on the board to work. They just want to approve everything the Management Co says. They have no business being on the Board. Thank you.