Walking the “Fine Line”: Imposing Fines in Your HOA 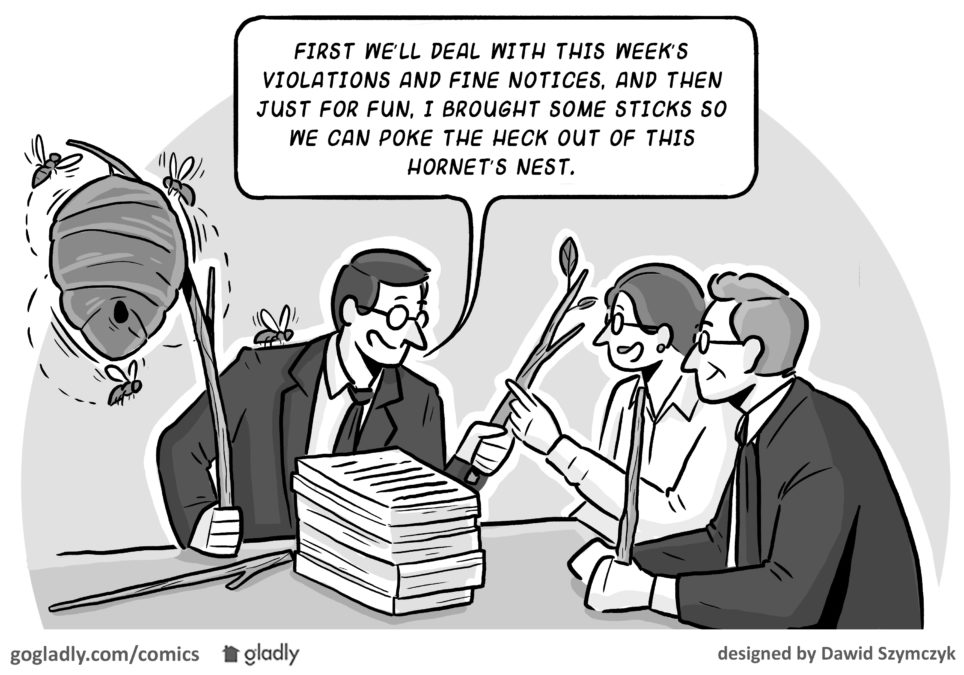 If you enjoy making your homeowners mad, you should definitely fine them. Levying them with extra costs is the ideal way to irritate, frustrate, and generate hate for the HOA throughout your community. And it’s not just the homeowners you fine that’ll be mad — no sir. Homeowners talk to each other. They talk about the HOA. And when Jim and Sally find out you imposed a $200 fine on their favorite neighbor for a reason they deem frivolous or minor (even if it wasn’t) they’re likely to take sides. And there’s nothing like a good homeowner vs. HOA battle to liven things up in the neighborhood.

Of course, fines have their place in any HOA. When people refuse to comply with the rules, are habitually late making payments, or otherwise throw giant wrenches into the workings of an HOA, fines can help them take the rules more seriously. Just like a speeding ticket or late fee on a mortgage payment, the very threat of getting hit in the pocketbook can keep things in check. But fines can also make your job more stressful by making homeowners angry, defiant, and more ready to complain. And in that way, fines can turn into a lose-lose situation for everyone.

Here are a few tips to help you walk the “fine line” between rule enforcement and angry homeowners.

When you do impose fines, do so following a specific and consistent protocol. This is important to avoiding any perception of discrimination, where one person was charged a fine and another person was not, even though the violation was the same. You don’t want to look like you’re treating different groups of people differently. The very appearance of discrimination can be very bad for the Manager and Board of Directors.

That said, there may be times when the board approves the removal of a fine. Maybe the situation was resolved quickly. Perhaps there is some kind of hardship that contributed to the violation or makes the fine impossible to pay. You’re probably good as long your process is well documented and consistently applied.

Communication with homeowners can’t really be overdone when it comes to the rules. Make sure new homeowners are not only informed of the rules, but also given a reasonable amount of time to learn and comply.

Too many HOAs take long-time homeowners for granted, assuming they know the rules so well by now that they automatically know when they’re breaking them. But even those who have been around a long time need periodic refreshers. One idea is seasonal reminders, where you distribute copies of the rules which especially apply to that time of year, such as exterior lights or candles in jack-o-lanterns.

And when people move in, try meeting with them in person with a housewarming gift — and a shiny new copy of all laws and declarations. Highlight the important ones and allow them plenty of time to ask questions.

A well-balanced set of provisions in your governing documents should permit the HOA to pursue legal action against homeowners when necessary.

While this may sound harsh on the surface, in extreme cases this could be a better alternative than levying fine after fine with a homeowner who insists on breaking the rules. It also shows other homeowners that they can’t just ignore the HOA, essentially buying the ability to defy the rules with an attitude of, “I’ll just pay the fine.”

Talk to the Violators

When serving someone with a violation, take it as an opportunity to talk to them about it. Make sure they understand the rule they’ve broken and educate them on the reasoning behind it. Be firm but polite, and give them a chance to ask questions.

Simply having a cordial conversation can mitigate the problem, and most homeowners will appreciate being treated as a person rather than a broken rule on paper — with an associated fine. If you’ve had conversations but the problem persists, then maybe imposing a fine is the right thing to do in that situation.

For anyone in community management, violations are a part of the job. Rules will be broken — sometimes repeatedly. Because of that, fines are sometimes necessary, but should perhaps be a last resort.

How have fines improved compliance in your community? How have they backfired? Do you think they’re overused? Let us know your thoughts in the comments!

We’re going through these same issues.