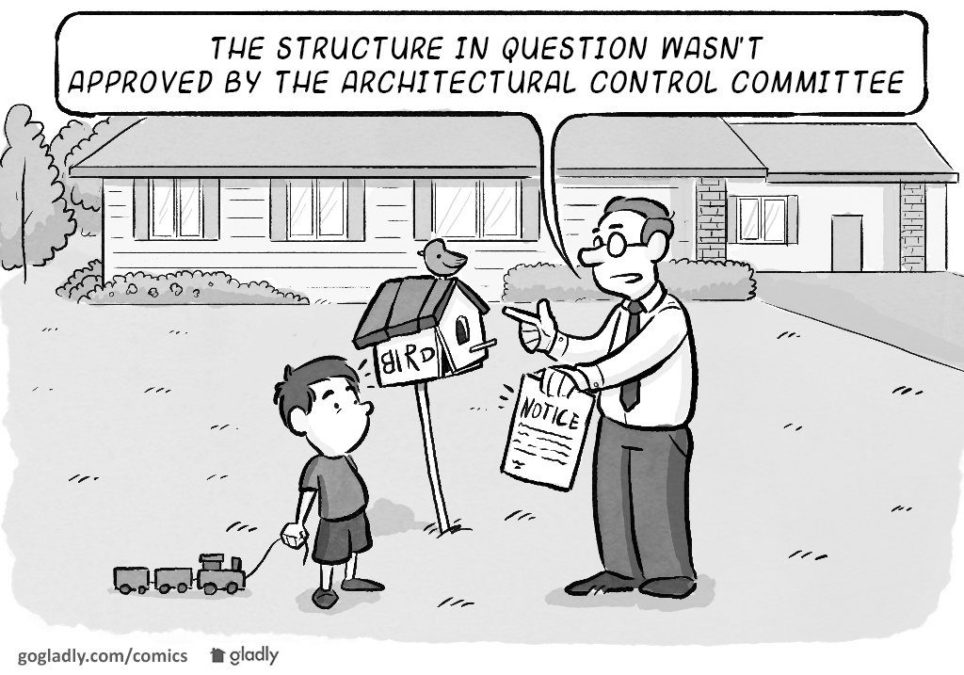 Architectural controls include such things as the general design of a home, exterior finishes, color, landscaping, fencing, window covering, sheds, etc. Those who appreciate them, point out that compliance with these standards dramatically increases property values and ensures a beautiful community for the owners.

Owners opposed to architectural controls feel as though they unfairly target HOA members, and create arbitrary or even silly standards. I have heard residents refer to their ACC in derogatory terms such as “gestapo”, “Nazi”, “commie”, “crazy”, or “belligerent”. Some of these owners feel as though an ACC is antithetical to the ideals of American home ownership and the United States Constitution, not realizing that the Constitution generally does not apply to private contractual relationships in this context.

No matter the viewpoint, an HOA should and can implement effective procedures to reduce conflict. Over the years there have been multiple media articles referencing methods to properly manage an ACC or criticizing the role of an ACC1. These articles include opinions from architects, constitutionalists, lawyers citing national case, and property managers who deal with the day to day realities of such policies. While these articles effectively contrast general policy consideration, the following practical tips will help an ACC properly function:

The case law in Utah is pretty clear that an HOA can indeed enforce standards via an ACC.

The case law focuses on the enforcement of the covenants and governing documents. Thus, it is essential for an HOA to have a clearly outlined policy of specific guidelines for the ACC to enforce. An HOA that has a thorough set of guidelines could have a set of documents that consists of over 30 pages of both process (the method and manner of submitting an application, follow-up throughout the construction process) and form (what the structure will look like, including finishes). Once an HOA has a policy in place, it is important that the HOA uniformly follows that policy.

An important consideration in the enforcement battle over ACC guidelines is the fact that generally the prevailing party will be entitled to an award of attorney fees. Pepperwood Homeowners Ass’n v. Mitchell, 2015 UT App 137, ¶ 12, 351 P.3d 844. In Kenny v. Rich, 2008 UT App 209, ¶¶ 42-43, 186 P.3d 989, a Utah court awarded attorney fees to an HOA who was obligated to sue to enforce architectural restrictions. I have personally been involved in representing HOAs who have both enforced their guidelines and recovered substantial attorney fee balances as a result of an owner’s noncompliance. In some cases, the expense and stress of litigation could have been avoided if the non-compliant owner (or their attorneys) could have set aside the emotions and made a decision on the case law and contracts.

In the event of a violation, it is important for the HOA to inform the owner of the potential liability that will result if the HOA has to take enforcement action. This simple step can often prevent the necessity of the HOA taking additional judicial action to correct the issue.

By establishing good policy, keeping members informed, and consistent enforcement the ACC can be integral to the long-term function and cooperation of the owners within an HOA.

Great article! Good tips- A skilled mediator can also help to resolve issues before they turn into litigation for the Association. As an attorney/mediator of condo disputes, My motto is “Mediate Don’t Litigate”- Mediation is a successful form of dispute resolution BEFORE problems can escalate-

Violators beware. If if you disagree with the rules and regs, think twice before defiantly disregarding the rules it could cost you. Agree with Kat Marquis – mediation can be very effective in architectural control disputes.

Kat, I totally agree that a good faith mediation is a definite plus to resolving these cases. In one of these cases we mediated and were willing to make some concessions in an effort to get the issues resolved. Unfortunately the opposing party and their counsel refused to listen to the advice of the mediator. This greatly increased the expense of the litigation and led to a more expensive resolution for the homeowner.

Thanks for your comments- I find that Litigation is hallmarked by the 4 Cs- Contested, Costly, Contentious and Continued-

Through Mediation, I see community association disputes that can and do get resolved quickly, more cost-effectively and with the preservation of relationships–

Resolution is the way to go- As Henry Ford says,” Don’t find fault, find a remedy”-