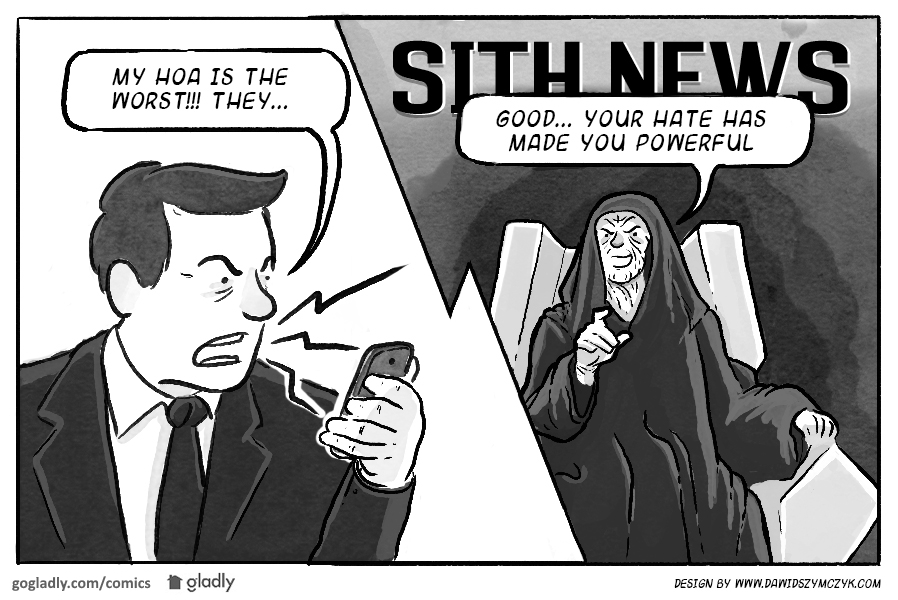 Not surprising that in a random sample of newspaper and TV stories focusing on HOAs and condo associations, 13 of 16 stories were about disputes and controversies. Only 3 stories were positive.

Little has changed since that informal survey last July. Just the other day, for example, a story about dog poop DNA testing creating a “stink in one community” was headline news.

The news media love controversies. And why wouldn’t they? Controversies attract readers and viewers like poop attracts flies. So you can bet if there’s some controversy brewing in your association, a newspaper or TV reporter just might come knocking on your door. And it’s not fun when that happens.

Anticipating controversies, issues and problems can be uncomfortable because you have to think about them as honestly and objectively as possible.

Even if you have to grit your teeth and cringe, getting a handle on things that might go wrong can be extremely helpful. When you identify potential problems, maybe you can do something about them before they become headline news. And even if they can’t be fully resolved, at least maybe something can be done.

So… take a deep breath and grit your teeth. Because a little anticipation can go a long way.

Harvey is retired from Bank of America as senior vice president in charge of corporate communications and media relations where he Developed communications strategy and messaging on such key company/industry issues as fees, financial privacy, unit consolidations/mergers & acquisitions.He has also served on HOA boards and is the author of At Least Some PR, a booklet about homeowner association communication and PR. His articles about public opinion and PR have been published in Business Insider, American Banker and regional newspapers.

One of the challenges we’ve faced is the right of individual privacy versus the right of the individual to give their version of events to everyone who will listen. A compliance issue occurs and the public narrative is shaped by the homeowner that – was towed from a disabled parking space, didn’t remove a dead tree, allowed their kids to graffiti the side of the clubhouse, etc. As a board and management company we can only respond with generalities about how issues are resolved and options every homeowner, including those on the board, may use to ensure their disputes are… Read more »

You’re absolutely right, Catharine. Privacy is extremely important. Homeowner associations, like other organizations and businesses, need to be mindful of privacy issues. Because of privacy and for other reasons, as well, spokespersons for organizations and businesses often can’t respond in kind to what someone is saying in news media or during an HOA meeting. I often talk about careful communication, describing it as pressing the ‘pause’ button in one’s mind before responding to something that’s being said or alleged. As you point out, often HOA spokespersons can only respond with generalities. And that’s frustrating, but necessary. It’s particularly frustrating when… Read more »

Hi Catharine, thanks for the great comment, The coffee cup conversation helps to humanize the situation and foster understanding on both sides.

Homeowner Association Abuse: The Gates of Hell What happens at the neighborhood potluck isn’t what happens at a board meeting. Governance of homeowners associations doesn’t always occur using an open door policy. More than often, key judgments are self-serving and determined utilizing a clandestine, exclusionary, closed-door policy, or “executive session”. Homeowners must protect their investment and avoid potential exposure. Following is a true story. In an established, gated suburban Sacramento, California neighborhood, million dollar homes coexist with lesser-valued properties. Owners enter their garages, shut their doors and don’t ask questions. They should. Ostensibly, a homeowner’s association board of directors and… Read more »