Animals and Your HOA — The Straight Poop 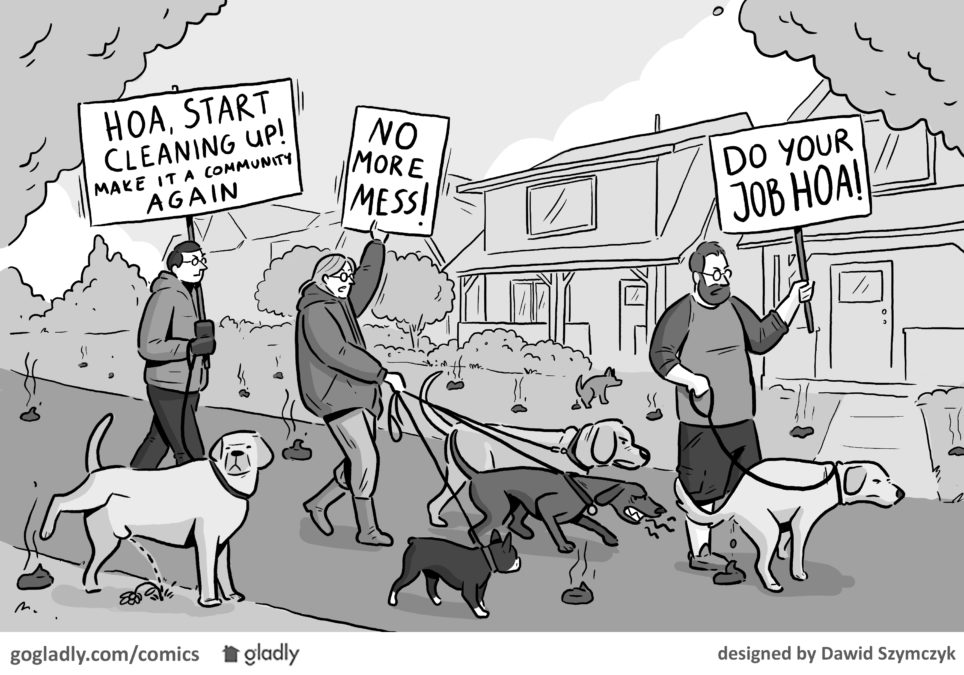 Your HOA probably has some pet restrictions in place. But what can you really expect?

Your HOA has rules for a reason. They protect you. They protect the organization. They make your HOA a more beautiful, pleasant place to live — at least that’s the idea. This legal framework of regulations isn’t meant to be overly restrictive. They aren’t there to make you feel like you can’t hang a wreath or listen to music without getting a nasty note.

Actually, there are many obvious perks of having certain restrictions in place:

Most people expect and appreciate these types of restrictions when they move into a community. The rules make for an arguably cleaner, safer, more beautiful place to live. In fact, national studies have shown that well-observed HOA by-laws actually result in better property values — and isn’t that what everyone wants?

But with animals, things can get messy. Literally.

Many people feel strongly about their pets. They provide companionship, unconditional love, and endless comic relief. But living in close quarters, they can present their own set of issues. A lot of people actually move into an HOA to avoid dealing with neighborhood pets.

Why would anyone want to actively avoid Fido or Fluffy?

And really, who could blame them?

Pet restrictions not only alleviate the complications and inconveniences of an HOA full of animals, but depending on the type of community you live in, they can also protect animals from excessive confinement.

Whatever your rules, make sure they are clear.

Both pet owners and non-pet people should carefully read your pet restrictions, so make sure yours are crystal clear. It’s the only way for residents (and board members) to know what is allowed and what to expect, resulting in fewer questions and less conflict.

But what about service animals? Well, that’s a whole new ball of wax. Read about it here.

[…] my last post I talked about the benefits of setting clear pet restrictions in your community. But you may be […]

If your HOA does not have specific rules about animals ie. barking, fouling, whining, does your city ordinances not cover this whether you live in an HOA or not.

Hi Gayle, Often the city ordinances do cover those types of issues. However the issue comes with enforcement. If the HOA does not have a policy in place they can’t enforce it so they must rely on the city to do it and in many cases the city is not very proactive in matters like this.

Thanks. I have come to understand that this is the case.