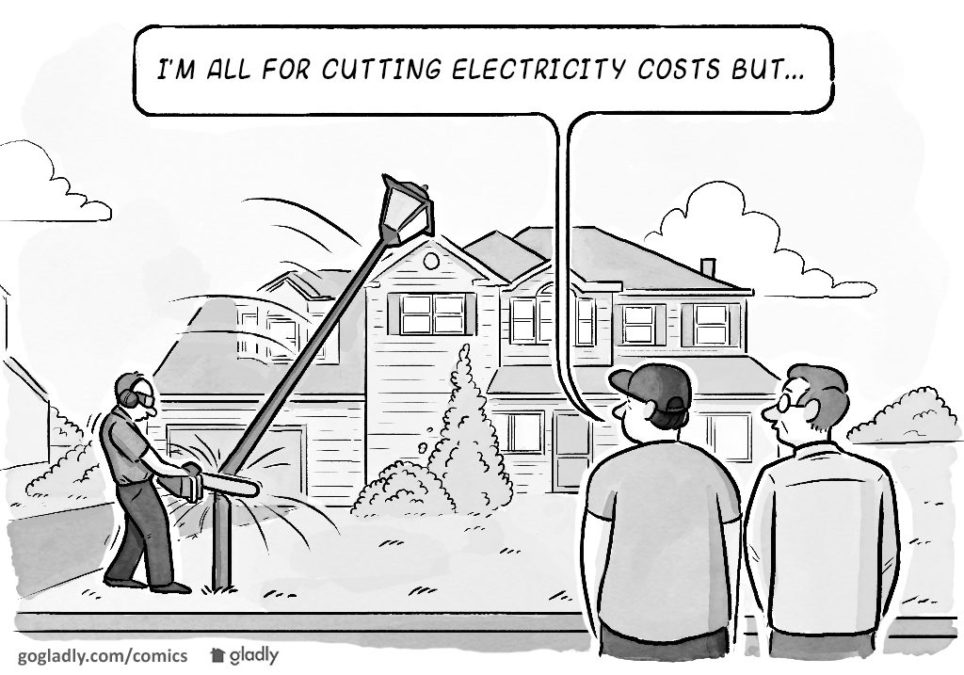 HOA Managers and Board Members are constantly struggling with increasing costs, which they have to pass on to HOA members. For this exercise, the reason why costs are increasing isn’t that relevant. The important point to remember when it comes to increases is that they usually increase, on average, at a rate greater than inflation.

But — how about instead of just passing those increases on, we work on making smart HOA budget cuts? The difference can of course be put into the capital improvement account should the Board so choose.

Just because you learned in business school that fixed costs are not variable doesn’t mean that that’s the case in the “real world.” For instance, every HOA needs and uses electricity. However, the cost of electricity has two variables; the first being the cost per kilowatt and the second being how many kilowatts your HOA uses.

Changing light fixtures or light bulbs and swapping out hardware can often result in 50—100% reduction in electric use, depending on what is currently being used. Yes, 100%!

Logically, a 100% reduction would require the HOA to produce its own electricity. This is quite possible in today’s solar-society where solar panels are becoming more and more cost effective to afford and install.

Cutting electric costs by 50% doesn’t require solar installation; it frequently only requires an upgrading of the fixtures or the lamps, installation of motion sensors, or a combination thereof. Either way, there are huge savings to be realized that are often overlooked because they are not initially considered “large.”

There are an enormous amount of alternatives on how to lease roofs or other common areas in HOAs to install solar that can be used either for the individual units, or for the common space.

HOAs are often slow to embrace change. There are still HOAs that do not allow their members to install solar panels. However, as solar becomes more affordable and homeowners become more aware, they are more likely to put pressure on boards to change policy and allow solar.

When it comes to cutting operating costs for HOAs, every penny counts. It is not just about that one penny, but the cumulative effect and changing the mindset of boards and residents, to value reduced waste.

Co-founder at Pendo LLC & The Folson Group
Tina Larsson is the CEO of The Folson Group, which she co-founded in 2014 after three years of engagement with one co-op which during that time saved $430,000. The Folson Group is a New York-based financial consultant specializing in cost efficiencies. The company helps boards and managing agents cut costs so that they can keep fees from escalating. Ms. Larsson has over 22 years of investment and research analyst experience in the financial services industry. She co-founded her own independent investment advisory firm in 2007, following a long career as a portfolio manager and research analyst at Horizon Asset Management, Inc., an independent portfolio manager and provider of proprietary research. Ms. Larsson has been published in multiple subscription-based investment research products, as well as various media publications. Ms. Larsson has a BBA and MBA, both from Pace University.

Every Condo / Coop owner should read this. Costs increases should not be blindly accepted. With a little work, as the author shows, costs can be cut substantially. The example here is electricity, but I think the same holds true for most of the line items in your budget. Plus, lower expenses increase the value of your property, so it is definitely worth the effort!

At our insurance agency we help our condo associations cut their insurance cost. It takes little effort to review their current policies and replace them with updated coverage. Most associations we work with have not reviewed their policies for five plus years. They are often shocked with the gaps we expose in their current policies and the savings we provide. Great article Tina!

This is a great article because it encourages HOAs to challenge the status quo. Hopefully these innovative ideas gain traction.

When you challenge the status quo and get negative pushback….then what?

Excellent question, K. How do you take the HOA in a new direction? I think that this is one of the most difficult and important things that any organization can do. Chelle O’Keefe wrote a great article addressing that very question. Check it out: https://gogladly.com/blog/leading-change-in-your-community/

Burke Nielsen also wrote an article on the same topic with a great example: https://gogladly.com/blog/changing-the-direction-of-your-association/

Let me know what you think?

This is a must-read for all condo and coop owners. So often owners accept their monthly fees believing there’s nothing they can do about it. WRONG! Thank you for turning on the light!