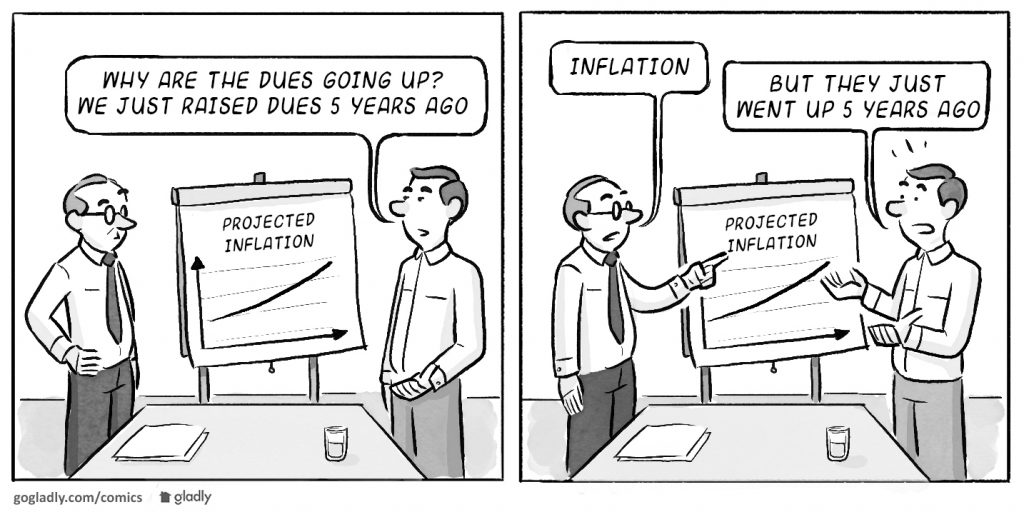 Increasing the HOA dues is a dreaded and painful event for everyone involved. Nobody likes to see dues increase — and that includes managers and board members — and yet, it can’t be avoided. With inflation, changing regulations, and maintenance demands it’s impossible for an association to keep assessments flat over the long run. So why do so many associations put it off until it’s critical?

For many associations the dues increase is painful because of the frequency — or should I say the infrequency of the dues increases. That’s right, you’re not increasing your dues often enough. Try that as your next newsletter headline.

The problem with increasing dues every 6 years, is that the amount is usually so large that it becomes a big financial hit for most homeowners. When dues don’t increase for a long time, many homeowners start to believe that dues should never increase. The way they see it, “the HOA was just fine up until now, so this 30% increase seems like an outrage” — and quite frankly they’re right!

I call this the Revenue Roller Coaster because not only do the dues increase in big jumps but this method usually has a roller coaster effect on reserve funding as well.

While managing HOAs I had the opportunity to work with a community that followed the “revenue roller coaster” model. They increased dues only when it became absolutely necessary. Over about 22 years they only increased dues three times. To make things worse, dues started too low leaving reserves unfunded for the first 15 years. When comparing the data from this community with inflation it’s clear they didn’t follow the most prudent financial path. 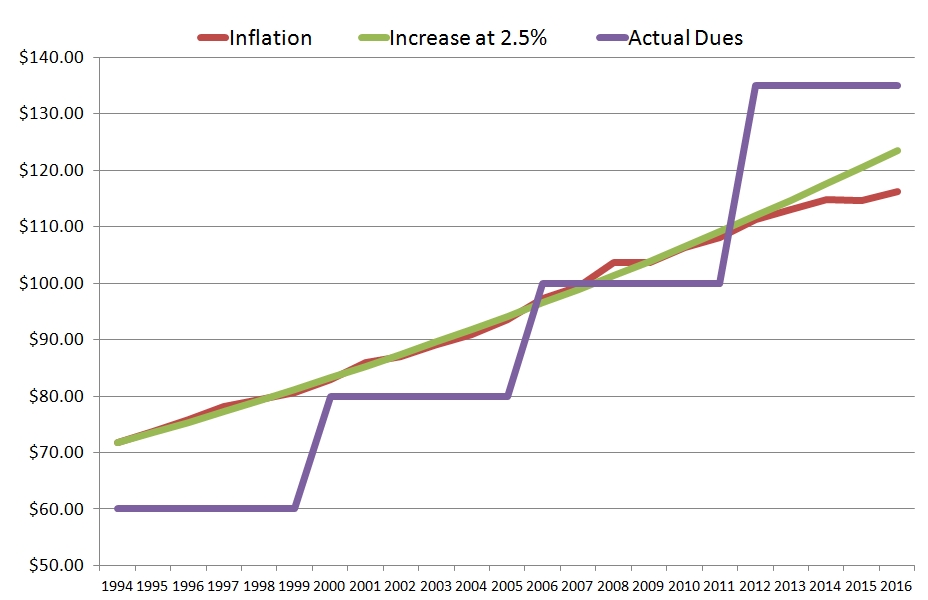 In an ideal world this community would have started with dues a little higher, and then increase them by 2.5% each year. The result would have been dues that closely resemble inflation, allowing the association to keep up with expenses and properly fund reserves, without the High dues required to makeup for the lack of capital.

You’ve heard the argument — something about keeping dues low for as long as possible “it’s a win for everyone”, they say. After all, low dues reduce wasteful spending, increase resale value, and improve overall homeowner satisfaction — Right? Don’t get me wrong, saving money and reducing expenses is important, but ignoring the effects of inflation can cost you. As you can see in this chart, with every passing year that dues don’t increase the HOA is missing out on precious revenue. 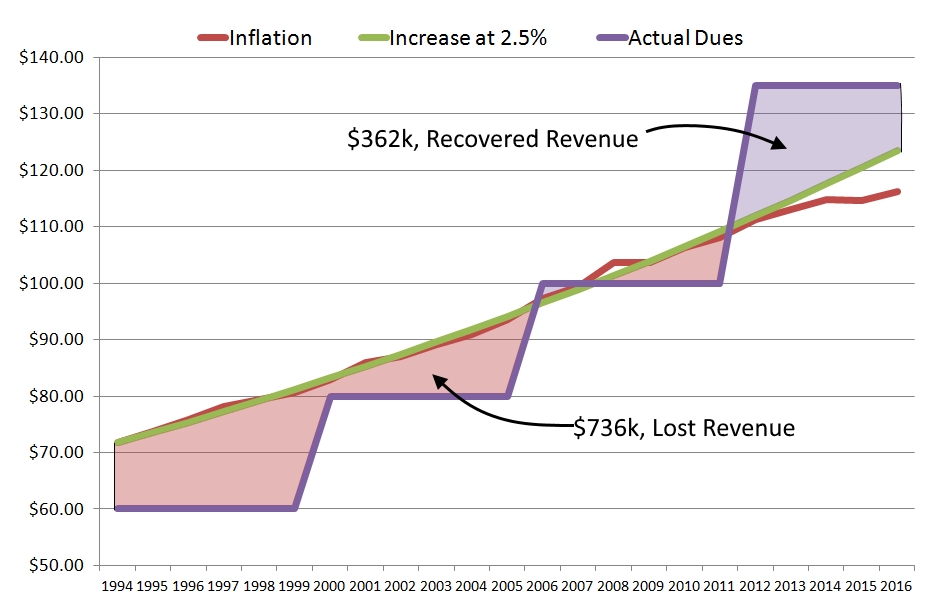 Over the course of 17 years, this community lost $736 thousand dollars and recovered only $362 thousand in the last 5 years. As it stands today this community is doing much better than they were 5 years ago, however the recent owners are the ones paying the price for the lost revenue of the past. Perhaps resale value and homeowner satisfaction would be better had they followed the course indicated by the green line in the chart.

Becoming a community that increases dues a little each year is tough, it take consistency, forward thinking, and the ability to educate homeowners to support the idea. But in the long run you will have lower dues, consistent revenue, and the capital that will help avoid a special assessments or large dues increases.

Burke Nielsen
Founder and Account Manager at GoGladly
Burke is Gladly's top industry expert. After 12 years in portfolio management, Burke founded an HOA management firm, and has drawn from that experience to offer insider-level understanding to Gladly. One of Burke's rare charms is that he actually loves listening to your problems. His more traditional hobbies include camping, 4-wheeling, and spending time with his wife and 5 terrific kids,especially when he gets to nag them about homework (nag the kids, not his wife).

Great information presented in an easy to understand format. Thank you for sharing.

This is great – especially like the “Show Me the Money” chart. I understand this, but how do you get through to people who refuse to admit reality? People appear to deliberately play dumb in hopes that the dilemma will magically solve itself.

One of our clients does their annual increases based on a percentage they decided on about 5 years ago. They then special assess when needed. My preference, and what most of our clients do, is do a budget based on current actual expenses, and then add in some percentage of the recommended reserve funding. We estimate high on some costs like snow removal when we can to make sure there’s some cushion. If our clients won’t fund reserves at an acceptable level then they won’t be our clients for long. We view 70% as acceptable funding. Not preferred, but acceptable. Once the budget is built with reserve funding then we see how much of an increase that is to the assessments and communicate with the Board and try to get approval.