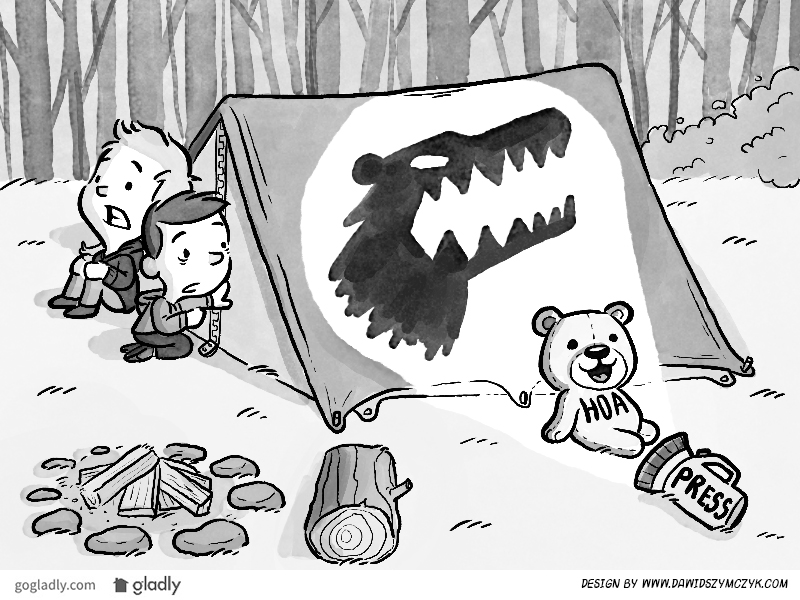 Believe it or not, there are people around the web who hate HOAs.

Actually, it’s not too difficult to find them. A quick google search and you’ll be lucky to find someone who isn’t filled with vitriol.

There are so many people online saying the same things about HOAs. Are they right? Is there widespread corruption? Is it bad enough that HOAs need to be completely rethought, or even banned?

Of course I don’t think HOAs should be banned, or I would find another line of work. But I can sympathize with the haters.

My guess is that almost all of these people have a true HOA horror story to tell. There are real problems with some HOAs. There are examples of fraud. There are some ridiculous rules out there (see 2nd question). And there are abuses.

The people who have lived through that stuff have a good excuse to be upset. The problem is that some of them project these terrible experiences onto HOAs in general.

The HOA haters often use news stories to support their argument. If you’ve followed HOAs in the news, you too might come away thinking that they are nothing but vehicles of corruption.

This isn’t the journalists’ fault. They follow the juicy stories because that’s what’s interesting. “Successfully Balanced Budget” and “HOA Board Doing a Great Job” don’t make for tantalizing stories.

So we can’t judge HOAs by the news any more than we can judge anything else by the news. Here’s what I mean:

This week, Google Alerts sent me 22 news articles about HOAs. Of these articles, 14 (64%) were negative. (8 were about surprising or absurd rules and actions, and 5 spoke of improper or illegal behavior, etc.)

Google Alerts also sent me 52 news articles about the words “neighbor” and “neighborhood”. Of these articles, 28 (54%) were negative. (17 articles were about crime or violence, and 11 were about neighbor disputes, etc.)

We might think that all neighborhoods are pretty violent places if we were to judge them just by the news.

If we are to have well-informed opinions we must look at the entire picture.

The entire HOA picture is that, of the 65 million people who live in HOAs, 90% of them are satisfied or neutral. Of course that means that 6.5 million people have had a bad HOA experience. That’s a big number! And it indicates that HOAs need to do better. But it doesn’t mean that there’s widespread corruption or abuse. Far from it.

So the takeaways are that, in general, HOAs are good. Really good. On average they increase property values. All of them have issues, but so do non-HOA neighborhoods. And the HOA haters aren’t all wrong. We can sympathize with them and use their energy as impetus towards making HOAs even better.

Founder and CTO at GoGladly
Sterling has lived in HOAs and has managed them for a living. A self-described nerd, Sterling finds books about HTML5 and games like Settlers of Catan unreasonably exciting. His nerdiness extends to his love of camping, fishing, and hiking in Utah's breathtaking Rocky Mountains. He especially likes enjoying the outdoors with his beautiful and supportive wife and 4 awesome kids.

I enjoyed your article. It is a pleasant example of balanced journalism. Thank you! I have been a parliamentarian / meeting recorder for HOAs in San Diego, CA since 2007. Most of the people I have worked with are sincerely caring people. Unfortunately, most of them know little about HOA governance. I believe HOA issues would be significantly reduced if everyone that purchases within a community interest development (CID) was required to view a webinar, or meet with a paralegal or lawyer who explains the legal obligations of purchasing in a CID, specific to the state where the home is… Read more »

Victoria, couldn’t have said it better myself. Thank you for your thoughtful comment!

I agree this is well-thought out and balanced posting. Victoria Cohen, I think your recommendation about potential homeowners having to view a webinar is a good one. However, who produces the video is a very important factor–biases can easily creep into content, albeit even unintentionally For instance, the property management company has its agenda, CAI has its agenda, Association lawyers have their agenda, etc. So my first question would be, and I don’t have the answer, who can be “objective” enough to determine the which content is to be included, and at the same time, not scare off potential homeowners.… Read more »

Community Association Institute (CAI) is the only national organization that services the CID industry. There are some state organizations and local HOA law firms that offer Board education also.

I have been an active CAI Homeowner members since 2004, so I am speaking from experience and bias. I support Board education, and CAI has created some great curriculum.http://www.caionline.org/events/boardmembers/Pages/default.aspx

Education and the continued repeat of pro-active sharing that education is paramount to good leadership in maintaining the strength in an HOA. Often homeowners are satisfied with “everything is fine, I paid my annual assessment” and we never see them again until the next Annual Meeting. Without interaction and understanding the idiosyncrasies of our governing documents there will always be HOA hate. Good article Sterling, and your cartoon is spot on. My own eye-opener involved CAI’s Best Practices publications. Since joining CAI my own HOA Board of Directors have retained their copies and when a new director is elected those… Read more »

Hi Nance. I love your emphasis on education. My guess is that the majority of HOA heartburn could be avoided if the owners, board members, managers were simply better informed.

It’s a very fair point that “we don’t read about airplanes that DON’T crash,” but generating publicity for the true HOA horror stories may PUT pressure on the bad ones to reform, and KEEP pressure on the good ones to stay good.

Please take a moment to read (and share) my HOA horror story.

Because of my ‘invisible disability,’ and a group of people who convinced the Fort Collins, Colorado authorities that there was nothing medically wrong with me, I have lost absolutely everything.

The HOAs that commit this kind of rank abuse need to be held accountable for their actions.

Hi Neil. I’m so sorry for your terrible experience. Thank you for sharing.

Neil, it’s unfortunate that you didn’t reach out to the state commission that deals with ADA cases. This is one that was ripe for justice. You may want to contact them now, in case there is anything they could do for you.

On 8/26/15 Sterling Jenkins wrote a blog entitled “Who’s Afraid of the Big, Bad HOA?” where he stated that “90% of [homeowners in an HOA] are satisfied or neutral”. First, I would like to know exactly and specifically where he got this info and second, in checking some stats from The Foundation For Community Association Research that is mentioned in his blog, I discovered that “the Foundation supports the Community Association Institute (CAI)” whose “members include community volunteer leaders [aka Board members], professional managers, community mgmt. firms and other professionals and companies that provide products and services to associations.” The… Read more »

Hi Rina.Yes, the 90% number comes from the source that you mentioned.

As for your comment about my not being impartial, you’re right! Both I and the CAI have something to gain from having high satisfaction numbers. However, I do try hard to be objective and I have no evidence that the CAI is any different.

If anything, I would think that if they did cook the books, they would have made the satisfaction numbers much higher. 6.5 million unsatisfied homeowners is a big number!

On 8/31/15 Sterling Jenkins responded back to my comment stating “both the CAI and I have something to gain from having high satisfaction numbers”. That statement clearly verifies that the info provided by the Foundation For Community Association Research – an organization they “work with” – is biased and slanted towards CAI-controlled property ownership. He then continues “I do try hard to be objective” which shows that he is NOT objective, and so don’t try, BE OBJECTIVE!!# Finally, Sterling Jenkins states “if they [the Foundation] did cook the books, they would have made the satisfaction numbers much higher.” First, you… Read more »

Obviously, a political opinion survey funded by the Community Association industry needs to be taken with a grain of salt. That said, education is an important first step, but it certainly isn’t the answer to consumer dissatisfaction, financial risk, and social discord in Association-Governed Residential Communties. I believe consumers deserve full disclosure prior to taking title to a property, whether they purchase or otherwise inherit that property. Ditto for tenants, because the tenant experience will differ in a condos or single family HOA home compared to a traditional landlord-tenant relationship with no Owners Association. The webinar is a good idea,… Read more »

Deborah – While your statement about 80% of all new construction is set up as a Planned Unit Development which has an association component is correct if not a tad low for Texas, maybe we should stop and think about why developers are choosing this option. Buyers are apparently drawn to gated communities with shared amenities; otherwise no one would purchase the homes and developers wouldn’t make money. Those shared amenities need to have a vehicle for being maintained.

Kay, buyers are not actively seeking out and choosing HOAs. For most buyers, amenities are not at the top of their priority list. Many owners find they rarely make use of amenities, if present. Lots of smaller HOAs don’t even have amenities. In terms of location, buyers are more interested in proximity to employment, school, family, and friends. The fact that an HOA exists is incidental to the buying decision for most consumers. See NAHB’s What do buyers want, 2013 study HOAs and their amenities are NOT on the MOST WANTED list, but some standard HOA-features are on the MOST… Read more »

Developers have “chosen” to build planned communities because that’s what’s being strongly encouraged or required by local land use planning policies. But that’s because both local governments and developers want higher density which equals greater profit potential for developers and greater proeprty tax revenue for local governments. The housing market is has been supply-side driven, particularly for the past 2-3 decades. However, that increased density has also increased costs for construction and improvement of infrastructure outside HOA boundaries, such as major highways, storm water and flood control, transit systems, water utilities, energy and telecommunications, school systems, strains to the environment… Read more »

I laughingly call HOAs “a Necessary Evil”. We all have to put up with a little nonsense to keep property values up, pay for common areas and prevent abuses. And we all need to remain vigilant so a paint salesman isn’t appointed as the sole member of the Architectural Control Committee and sends out his own paints as the only approved colors, as happened in my Association. And, oddly, all the homes now needed new paint jobs.

Hi Todd. Thanks for the comment. Unfortunately, I think that there are a lot of people who would agree with your description. I completely agree that owners/board members/managers must be vigilant against fraud and abuse.

HOA’s in Florida are a Cuban democracy
No elections unless the entire population is up in arms
Boards stay in place for life, one couldn’t ask for a more intrinsically corrupt system